Dennis the Menace is 60 today!!

Dennis the Menace  celebrates his 60th birthday today and he is certainly looking pretty good for his age.
Dennis first appeared in issue 452 of the Beano comic on March 17th, 1951 and has been going strong ever since.
Apparently, the first official drawing of Dennis the Menace was by one of the Beano editors on the back of a cigarette packet. If you want to find out a whole lot more about Dennis the Menace from his debut in 1951 to his plans for 2011 and beyond then visit the Beano website . His entry in Wikipedia  is also crammed with interesting facts. 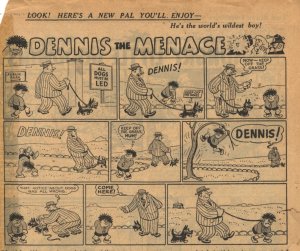 Dennis at 60 ... by kind permission of illustrator Paul Shinn

Comic book characters such as Dennis tend not to show their age. The wonderful illustrator Paul Shinn imagines that a 60 year old Dennis could well look like this….. If you would like to see more of Paul’s  work then you can view it on his blogsite Look What I Drawed or his website Paul Shinn Draws.

This entry was posted in General Annoucements, New 1951 Club member!. Bookmark the permalink.

One response to “Dennis the Menace is 60 today!!”