The Accident Book … extract # 12 (Watkins: The Man Who Fell to Earth)

(Watkins: The Man Who Fell to Earth) 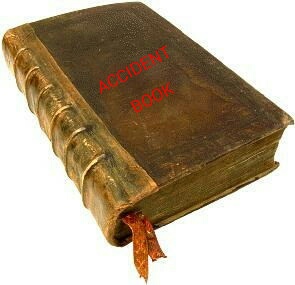 Those of you who joined me previously will no doubt remember the last unfortunate incident concerning Watkins. What follows is another extract from the ACCIDENT BOOK as recorded by Lord & Lady Northbunker on their estate in Dorset. 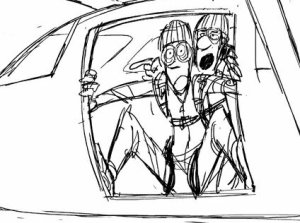 Watkins is always up for a bit of a challenge. He is such a fine fellow and a jolly good sport to boot. So it came as no surprise when he recently agreed to take part in a sponsored parachute jump on behalf of something or other. I agreed to sponsor him for a fiver on the one condition that he didn’t get himself killed.

The day arrived and Mrs Watkins provided him with an enormous packed-lunch that was enough to feed an army, albeit a fairly small one. She packed it carefully into his old army rucksack, pecked him gently on the cheek and waved a tearful farewell. The jump was to take place over the local aerodrome and I had very kindly agreed to drive him there. We arrived at the departure point only to discover that Watkins’ tandem jump-partner had gone down with a nasty tummy bug. He nevertheless absolutely insisted on going ahead with a solo jump instead. That’s the sort of man he is. Unbalanced. He assured the assembled group that he had completed several solo jumps during his army service and that the whole thing would be a piece of cake. So, I took charge of his rucksack containing aforementioned packed-lunch while he busied himself with his parachute pack. I feel I should really mention at this point that we were both momentarily somewhat distracted by the sight of Mrs Blythe Comely stripping off, as she had very kindly volunteered to do her parachute jump naked. This should help to explain the element of confusion that shortly arose. Anyway, the aircraft took off with Watkins and his fellow jumpers on board.

I made my way to a suitable vantage point alongside several other of the assembled spectators. I was feeling a bit peckish, having missed my breakfast due to a hideously early start. So I reached into Watkins’ rucksack for a bite to eat. I knew he wouldn’t mind if I helped myself to a banana …

Meanwhile, the aircraft had reached the correct height and all manner of folk were leaping out of it like wild things. Apparently, Watkins made a near perfect exit and after a spectacular freefall reached for his ripcord … 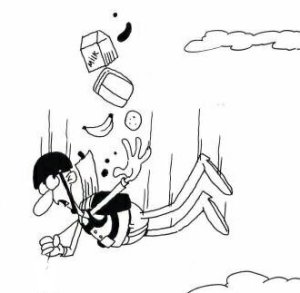 Fortunately for Watkins, this whole frighful episode was the unfortunate result of me eating a large piece of cheese before going to bed.

YES, IT WAS ALL A DREAM.

PS: Watkins phoned me up this morning. He has just agreed to take part in a sponsored parachute jump …