Middleton Tower Holiday Camp, near Morecambe, Lancashire
was opened in August 1939. Costing £50,000 and spread over 60 acres, it had 900 chalets and was a full-board camp with dining rooms for 3000 people.

The main entertainment building, which also housed a 2000 seat theatre, was built in the style of an ocean liner.

The man behind the venture was Harry Kamiya. He died in 1952 and the camp was operated by his family until being sold to Pontins in 1964. All of the chalets were then replaced with new brick structures and the outdoor pool was enclosed within a new building. In 1976 the camp gained fame by hosting the televised Miss Great Britain finale. Unfortunately the camp closed at the end of 1993. 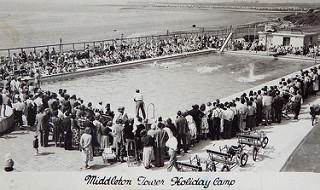 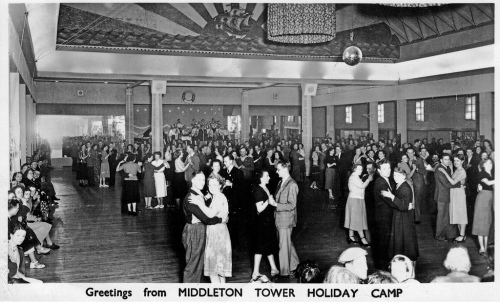 Dancing the night away …

This entry was posted in Chat from the author, General Annoucements and tagged 1950s, 1951, Holiday Camp, Middleton Tower. Bookmark the permalink.