I want to tell you about a blog called Club 51, run by Chris White. It’s a blog for and about people who were born in 1951. I am an honorary member, since I wasn’t born in 1951. ‘Nuff said about that!

Recently Chris had a post on the 1951 DeSoto (a old car for those of you too young to know what a DeSoto is!). When I read it, I thought of the little green Nash Rambler station wagon my family had, the first car I can actually remember. I suggested since Nash Ramblers were popular in the 50s, he might want to do a post on them, And he did. Here it is:

A quote from that post:“The Nash Rambler is a North American automobile that was produced by the Nash Motors division of Nash-Kelvinator Corporation from 1950 to 1954/55. It is widely acknowledged to be the first successful modern American compact car.” 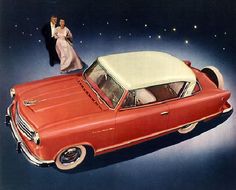 This entry was posted in Uncategorized. Bookmark the permalink.

A blog about pretty much anything