This is the moment on 14th October 2012 that Austrian Felix Baumgartner leaped into the history books after jumping from a world record 39,045 metres (128,100 ft) or just over 39 kilometres (24 miles). Baumgartner also set the record for the highest manned balloon flight (at the same height) and fastest speed of free fall at 1,342 kilometres per hour (834 mph or Mach 1.24)  making him the first human to break the sound barrier outside of a vehicle.Baumgartner was in free fall for 4 minutes and 19 seconds before finally deploying his parachute and landing safely in Eastern New Mexico. 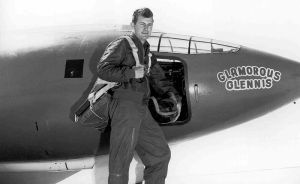 By sheer coincidence, due to the attempt being delayed, he achieved these world records on the self same day that Chuck Yeager became the first pilot to break the sound barrier on October 14th 1947, exactly 65 years ago. On October 14, 2012 on the 65th anniversary of breaking the sound barrier, Yeager did it again in a McDonnell Douglas F-15 Eagle out of Nellis Air Force Base near Las Vegas at the age of 89.

There is a another true but little known story which again concerns a parachute and an act of amazing act of courage which occured in … 1951. 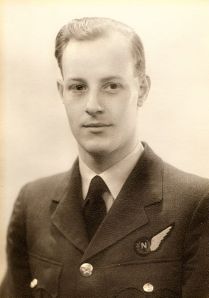 It concerns the man pictured left. His name was Flight Lieutenant John Alan Quinton. Born in 1921 he was posthumously awarded the George Cross for an act of outstanding bravery where he unselfishly saved a young air cadet whilst losing his own life after the aircraft he was in was involved in a mid-air collision over Yorkshire. The incident happened on the 13th August 1951

On 13 August 1951 Flight Lieutenant Quinton was a navigator under instruction in a Wellington aircraft (pictured above) which was involved in a mid-air collision with a Martinet aircraft. An Air Training Corps cadet was with him in the rear compartment of the aircraft when the force of the impact caused the Wellington to break up and plunge to earth out of control. Flight Lieutenant Quinton picked up the only parachute he could see, clipped it on to the cadet’s harness, showed him how to pull the rip-cord and ordered him to jump. The cadet landed safely and was the only survivor of the disaster, all the other 8 occupants of the two planes perished. For his selfless action he was awarded the George Cross, the UK’s highest award for bravery by a civilian or a military person where the award of the Victoria Cross is not applicable. In order of precedence, the George Cross is second only to the Victoria Cross.

And finally, for good measure, the picture below of paratrooper training was taken in 1951 in the skies above Fort Benning,USA.

Posted in Chat from the author, General Annoucements, Uncategorized